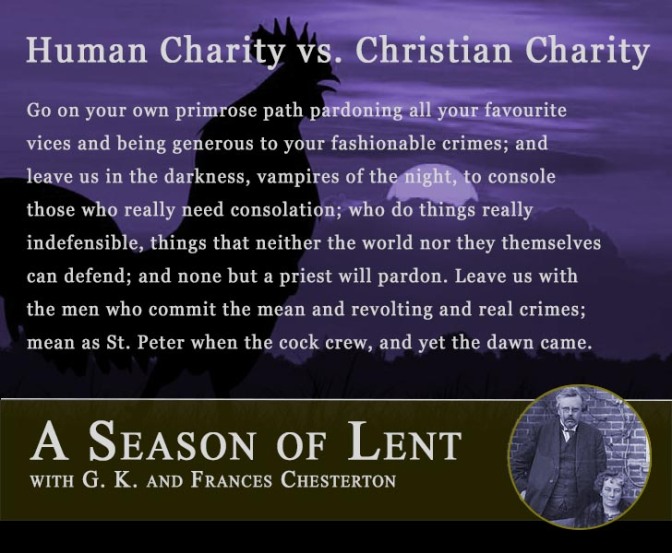 Real forgiveness coupled with real repentance, like everything else that is real, is extremely costly. But its reward is priceless: restoration and redemption! It is not a shrug of the shoulders. It is not mere words. It is real depth and real action. When forgiveness is not genuine, when repentance is not genuine, it becomes human and contemptuous. Not powerful and Christian.

Chesterton understood our capacity for contempt for the difference between human charity and christian charity when he observed the following:

When Christ tells us we must forgive our brother up to “seventy-seven times…if he repents” he is not being flippant. Neither is he setting the conditions for a bully’s paradise.

In other words, the sinner is not to impose forgiveness by demand upon anyone but neither are we to withhold it based upon the severity of the crime nor its repetition….*if* the sinner is sincerely repenting. Yet we do the perverse opposite in this Age: we try to conventionlize the sins we find “excusable” and so find easier to extend the appearance of “forgiveness”. We literally are encouraging their continuance with no remorse and no amends. But when we do, we cancel out any hope of real restoration and redemption for the sinner.

Chesterton takes on the character of Father Brown to explain why we must never conventionalize sin and make cheap the mercy and magnificence of forgiveness.

“You forgive because there isn’t anything to be forgiven”
“I wouldn’t touch him with a barge-pole myself,” said Mallow.

“There is a limit to human charity,” said Lady Outram, trembling all over.

“There is,” said Father Brown dryly; “and that is the real difference between human charity and Christian charity. You must forgive me if I was not altogether crushed by your contempt for my uncharitableness to-day; or by the lectures you read me about pardon for every sinner. For it seems to me that you only pardon the sins that you don’t really think sinful. You only forgive criminals when they commit what you don’t regard as crimes, but rather as conventions. So you tolerate a conventional duel, just as you tolerate a conventional divorce. You forgive because there isn’t anything to be forgiven.”

“But, hang it all,” cried Mallow, “you don’t expect us to be able to pardon a vile thing like this?”

He stood up abruptly and looked round at them.

“We have to touch such men, not with a bargepole, but with a benediction,” he said. “We have to say the word that will save them from hell. We alone are left to deliver them from despair when your human charity deserts them. Go on your own primrose path pardoning all your favourite vices and being generous to your fashionable crimes; and leave us in the darkness, vampires of the night, to console those who really need consolation; who do things really indefensible, things that neither the world nor they themselves can defend; and none but a priest will pardon. Leave us with the men who commit the mean and revolting and real crimes; mean as St. Peter when the cock crew, and yet the dawn came.”

“The dawn,” repeated Mallow doubtfully. “You mean hope — for him?”

“Yes,” replied the other. “Let me ask you one question. You are great ladies and men of honour and secure of yourselves; you would never, you can tell yourselves, stoop to such squalid reason as that. But tell me this. If any of you had so stooped, which of you, years afterwards, when you were old and rich and safe, would have been driven by conscience or confessor to tell such a story of yourself? You say you could not commit so base a crime. Could you confess so base a crime?” – G. K. Chesterton, The Secret of Father Brown,1927